I'm proud of you, Reiko!

On June 6th, a 11 years old girl passed away, because of brain stem glioma, after struggle with the disease for about 1 year. Her name was Reiko.

I knew her because her father was one of my friends. He is a librarian, and I'm a heavy user of libraries. We knew each other at some informal meetings of librarians.

After Reiko's glioma was found, her parents shared Reiko and family's struggling with the disease on their blogs. Her mother was working for day care center for children at that time, but she had been a librarian. Both her father and mother knew well about the importance of information and collaboration, so they shared the struggling positively on blogs, Facebook, and Twitter.

At first, I was afraid about that if Reiko would be known exactly about her disease. Her parents said her "The disease in your brain will be killed by treatment". They didn't said for Reiko that was fatal. But people who shared about Reiko's struggle helped her, her older brother Shu-ichiro, and her parents. Now Reiko's parents are considering that Reiko might be aware of she was dying for several reasons. I think that the merit of sharing superior than the demerit of that ( Reiko might have noticed about her disease ).

I have no human family living with me, but during the year, I was feeling that I was a member of large family or "Team Reiko" that are helping Reiko, Shu-ichiro, and their parents. I became happy, angry or sadly when I read Reiko was well, sad or bad.

Reiko was so clever, serious girl with kind heart.
I'm sorry that I can't see Reiko in teenage, adolescence and adult life.
But I'm happy because I could live with her.

Reiko, I'm proud of you! 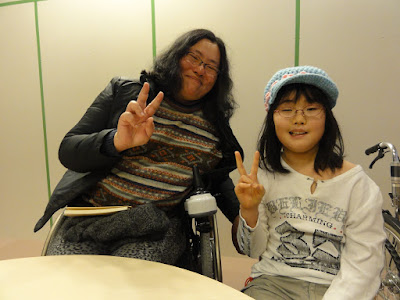